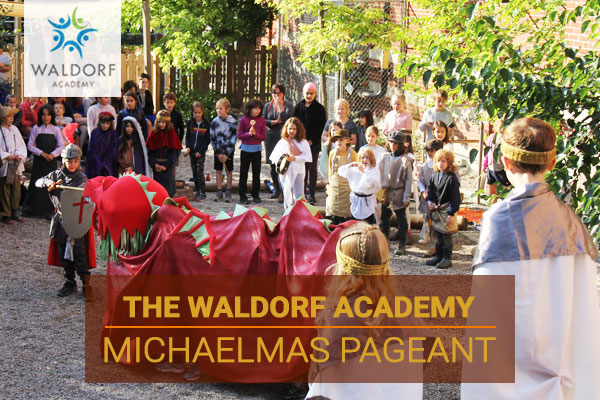 Michaelmas is an annual pageant at the Waldorf Academy,  and celebrated by Waldorf schools around the world for its seasonality and symbolism.

Why Does Waldorf Celebrate Michaelmas?

Waldorf schools around the world will celebrate Michaelmas because it is a reminder that the dragon and the saint are both within us, the dragon representing cold rationality with no moral compass, leading us to evil.

The archangel Michael, on the other hand, shows us that we must have inner strength, initiative, and selflessness in order to conquer our fears and anxieties.

This should be accomplished not by slaying our dragons, but through applying our consciousness and by accepting the eternal and the divine within each of us. 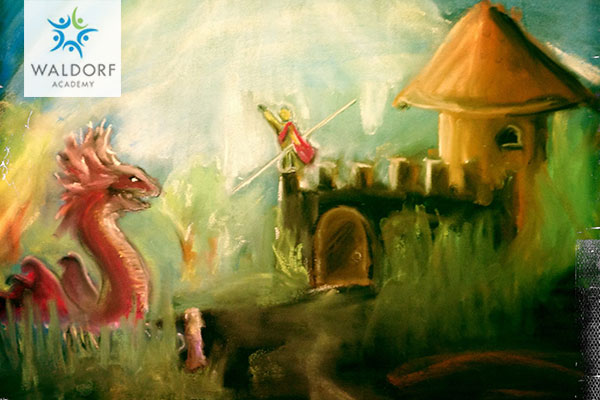 While it might sound like a complicated parable for children so young, we believe it is an important principle that allows children to thrive in their academic pursuits while at Waldorf Academy.

Children in grades one to five put together a play in which they enact St. George conquering the dragon with the help of St. Michael, who gives him the courage he needs to succeed in his task.

The students are fully involved in creating their festival and the costumes they wear; parents attend the festival as well, at which everyone drinks cider and eats fresh ‘dragon bread’.

Michaelmas is a feast day that the Western Christian Church celebrated on the 29th of September, though it was originally a pagan festival.

Michaelmas was first embraced by Christianity in the third century, but only became an official feast day in the fifth century, when St. Michael’s Basilica was dedicated.

In eleventh century England, it was law to fast for three days before the start of Michaelmas; it was during this time that it was declared a Holy Day of Obligation, which lasted up until the eighteenth century.

Falling on one of the ‘quarter days’ of the year – on or close to the autumnal equinox – it was associated with the harvest, the start of autumn and with the shortening daylight hours.

It was on these quarter days, traditionally, that rents were due, debts were paid, leases started, servants hired and university terms begun.

Who Was St. Michael?

Saint Michael was the warrior angel who fought against Lucifer’s uprising against God, and battled the rebel angels who were transformed into the physical form of dragons by the power of his will.

While the angel Michael was victorious, he did not kill the dragon Lucifer, instead holding it at the point of his spear, again displaying his inner strength through controlling his will carefully.

The Archangel Michael is the protection against the dark of the night and during the cold winter months, and was celebrated for keeping families safe during these times.

Darkness was believed to encourage negative forces, who gained strength when there was less light to keep them in check.

A very different educational theory than what you’ll find in your local school system, the Waldorf Academy embraces moral teachings to reinforce values that help children learn and apply that learning responsibly in the world around them.

If you feel as if your children are being schooled in a manner that misses this mark while attempting to teach them through cold facts and rationality without reason, you might find that Waldorf Academy is a better home for your family.

Call now to book a tour and learn more about the many ways in which Waldorf approaches education differently in order to produce intelligent, well-adapted adults prepared for the rigours of the modern world.